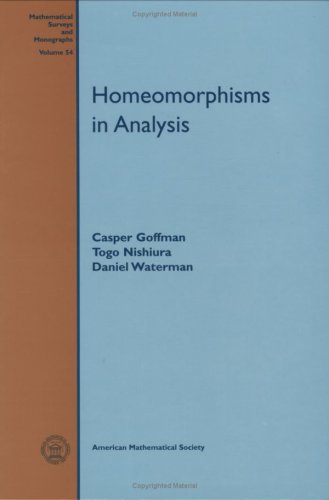 Homeomorphisms in Analysis
by Casper Goffman, at al.

Description:
This book features the interplay of two main branches of mathematics: topology and real analysis. The material of the book is largely contained in the research publications of the authors and their students from the past 50 years. Parts of analysis are touched upon in a unique way, for example, Lebesgue measurability, Baire classes of functions, differentiability, the Blumberg theorem, bounded variation in the sense of Cesari, and various theorems on Fourier series and generalized bounded variation of a function.

A First Course in Topology: Continuity and Dimension
by John McCleary - American Mathematical Society
A focused introduction to point-set topology, the fundamental group, and the beginnings of homology theory. The text is intended for advanced undergraduate students. It is suitable for students who have studied real analysis and linear algebra.
(16187 views)