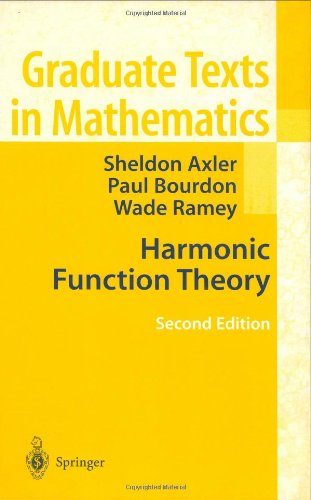 Description:
This is a book about harmonic functions in Euclidean space. Readers with a background in real and complex analysis at the beginning graduate level will feel comfortable with the material presented here. The authors have taken unusual care to motivate concepts and simplify proofs. Topics include: basic properties of harmonic functions, Poisson integrals, the Kelvin transform, spherical harmonics, harmonic Hardy spaces, harmonic Bergman spaces, the decomposition theorem, Laurent expansions, isolated singularities, and the Dirichlet problem.

Introduction to the Theory of Fourier's Series and Integrals
by H. S. Carslaw - Macmillan and co.
An introductory explanation of the theory of Fourier's series. It covers tests for uniform convergence of series, a thorough treatment of term-by-term integration and second theorem of mean value, enlarged sets of examples on infinite series, etc.
(3325 views)

Lectures on Harmonic Analysis
by Thomas Wolff - American Mathematical Society
An inside look at the techniques used and developed by the author. The book is based on a graduate course on Fourier analysis he taught at Caltech. It demonstrates how harmonic analysis can provide penetrating insights into deep aspects of analysis.
(7861 views)

Lectures on Topics in Mean Periodic Functions and the Two-Radius Theorem
by J. Delsarte - Tata Institute of Fundamental Research
Subjects treated: transmutations of singular differential operators of the second order in the real case; new results on the theory of mean periodic functions; proof of the two-radius theorem, which is the converse of Gauss's classical theorem.
(6477 views)