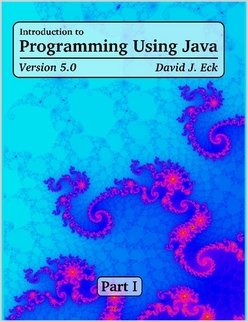 Description:
Textbook on introductory programming, which uses Java as the language of instruction. This book is directed mainly towards beginning programmers, although it might also be useful for experienced programmers who want to learn something about Java. It is certainly not meant to provide complete coverage of the Java language. You will find many Java applets on the web pages that make up this book.

Introduction to Computer Science using Java
by Bradley Kjell - Central Connecticut State University
The text for a first course in computer science using the programming language Java. It covers the fundamentals of programming and of computer science. It is assumed that you have the Java version 5.0 or later and a text editor such as Notepad.
(23998 views)

Introduction to Programming in Java: An Interdisciplinary Approach
by Robert Sedgewick, Kevin Wayne - Princeton University
This book is an interdisciplinary approach to the traditional CS1 curriculum. It teaches all of the classic elements of programming. The book is organized around four areas of computer science: programming, machine architecture, theory, and systems.
(15024 views)

Java: Learning to Program with Robots
by Byron Weber Becker - Course Technology
This book is an innovative approach to learning introductory object-oriented programming. Students are introduced to object-oriented concepts with simulated robots, a hands-on approach that is engaging and fun for both students and instructors.
(9525 views)