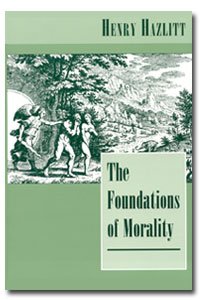 The Foundations of Morality
by Henry Hazlitt

Description:
Here is Hazlitt's major philosophical work, in which he grounds a policy of private property and free markets in an ethic of classical utilitarianism, understood in the way Mises understood that term. In writing this book, Hazlitt is reviving an 18th and 19th century tradition in which economists wrote not only about strictly economic issues but also on the relationship between economics and the good of society in general.

A Modern Theory of Ethics: A study of the Relations of Ethics and Psychology
by W. Olaf Stapledon
The author has chosen to examine certain modern ethical theories (which themselves seek to embody what is best in ancient thought about the good), and these he has considered in relation with other contemporary movements of the mind.
(11032 views)

Ethics and Modern Thought
by Rudolf Eucken - G. P. Putnam's Sons
In our days morality has ceased to be a matter of unquestionable certainty, and has been drawn into the wave of disintegration which is passing over our minds. This text appeals less to students and philosophers than to the cultured public at large.
(9559 views)

Animals and Ethics 101
by Nathan Nobis - Open Philosophy Press
The book presupposes no conclusions on the controversial moral questions about the treatment of animals, and argues for none either. Its goal is to help the reader better engage the issues and arguments on all sides with greater clarity.
(3676 views)

Fundamental Principles of the Metaphysic of Morals
by Immanuel Kant
How should human beings behave toward one another? How must we behave? One of the most influential thinkers of the Western civilization, Immanuel Kant elaborates upon and defends his understanding of the logical underpinnings of all human morality.
(12428 views)