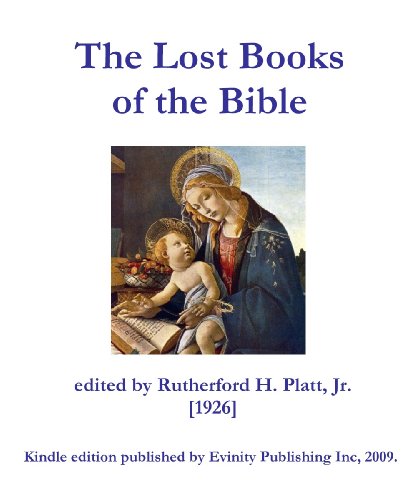 The Lost Books of the Bible
by Rutherford H. Platt, Jr.

Description:
This is a collection of New Testament Apocrypha, including many works which were admired and read by the early Christians, but which were later excluded from the canonical Bible. It includes accounts of the young Jesus, particularly the Gospel of Mary and the Protevangelion, which provides additional folklore about the birth and youthful adventures of Jesus.

Science and Christianity
by John D. Callahan
This book is about science and Christianity, and it reconciles the two. It is a book about man's place in the universe, with fascinating implications. The book is written for everyone, Christian and non-Christian, and it will challenge both greatly.
(10481 views)

Talmud of Jmmanuel
by John Grau
Jmmanuel, later called Jesus survived the crucifiction and later moved to Kashmir with his mother Mary, married and had children and teached others till he was 115 years old. His spirit was later reincarnated as Mohammed.
(12804 views)

The Hidden Christ: Taking the Gospel into the World
by Christoph Friedrich Blumhardt - The Plough Publishing House
These letters from Blumhardt to a missionary in China, turn the traditional concept of Christian mission on its head. For Blumhardt, the gospel of Jesus Christ has nothing to do with religion. There is no need to bring Christianity to people.
(7903 views)

Gospel Mysteries
- gospel-mysteries.net
This book explores many fascinating biblical mysteries, including: Does the Devil really exist; What was in the Lost Gospels; Where is Hell located; Who was the mysterious Beloved Disciple; Was Mary Magdalene secretly married to Jesus; etc.
(10465 views)