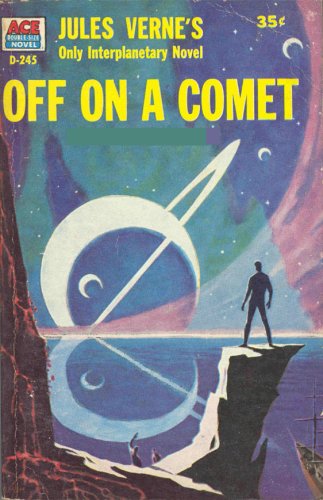 Off On A Comet, Or Hector Servadac
by Jules Verne

Description:
Although time has obscured this book, Jules Verne's Off on a Comet is a remarkable work. Verne takes his characters on a journey to the depths of infinite space, to present what astronomers of that time really knew of outer space.

After London, or Wild England
by Richard Jefferies - eBooks@Adelaide
Science fiction novel which describes an England of the distant future in which most of the people have died and a swamp covers the site of old London. The hero of the story sets out on a quest to win the hand of the daughter of a neighboring baron.
(8637 views)

Last and First Men: A Story of the Near and Far Future
by Olaf Stapledon - eBooks@Adelaide
Epic science fiction classic. A work of unprecedented scale in the genre, it describes the history of humanity from the present onwards across 2 billion years and 18 distinct human species, of which our own is the first and most primitive.
(8617 views)

A Voyage to Arcturus
by David Lindsay - Feedbooks
One of the most revered classics of science fiction, it has inspired, enchanted, and unsettled readers for decades. It is simultaneously an epic quest across one of the most unusual and brilliantly depicted alien worlds ever conceived.
(5706 views)