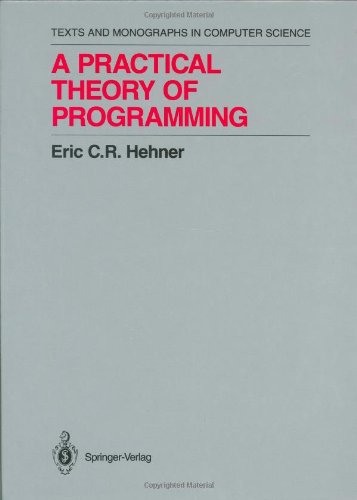 A Practical Theory of Programming
by Eric C.R. Hehner

Description:
Understanding programming and programming languages requires knowledge of the underlying theoretical model. This book explores aspects of programming that are amenable to mathematical proof. The author describes a programming theory which is much simpler and more comprehensive than the current theories to date. In the theoretical model, a specification is just a boolean expression and refinement is just an ordinary implication. The author develops a practical and broad method for writing precise specifications and designing programs whose executions probably satisfy the specifications.

Programming Languages: Theory and Practice
by Robert Harper - Carnegie Mellon University
What follows is a working draft of a planned book that seeks to strike a careful balance between developing the theoretical foundations of programming languages and explaining the pragmatic issues involved in their design and implementation.
(9952 views)

Semantics of Programming Languages
by Andrew M. Pitts - University of Cambridge
These notes introduce the structural, operational approach to programming language semantics. The course shows how to specify the meaning of some simple programming language constructs and to reason formally about semantic properties of programs.
(7527 views)