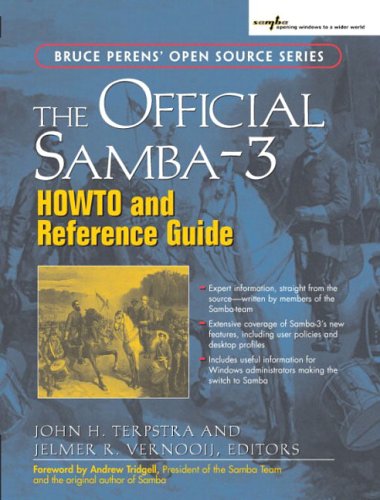 Description:
This is the definitive guide to using Samba-3 in production environments. It begins with the immense amount of HOWTO information published by the Samba Team and volunteers around the world, but that's just the beginning. The book's Samba Team editors have organized and edited this material around the practical needs of working Windows administrators. UNIX/Linux administrators will find all the answers they need as well.

Linux Packet Filtering and iptables
by Oskar Andreasson - Linuxtopia
This document gives a good and simple primer at how to get started with iptables. The text requires some previous knowledge about Linux/Unix, shell scripting, as well as how to compile your own kernel, and some knowledge about the kernel internals.
(8038 views)

Linux Newbie Administrator Guide
by Stan, Peter and Marie Klimas
A complete reference for new Linux users who wish to set up and administer their own Linux home computer, workstation or their home or small office network. The answers are meant to be simple and always supported with a readily usable example.
(8080 views)

Linux Administration Made Easy
by Steve Frampton
This documentation will attempt to summarize the installation and configuration, as well as the day-to-day administrative and maintenance procedures that should be followed to keep a Linux-based server or desktop system up and running.
(8541 views)