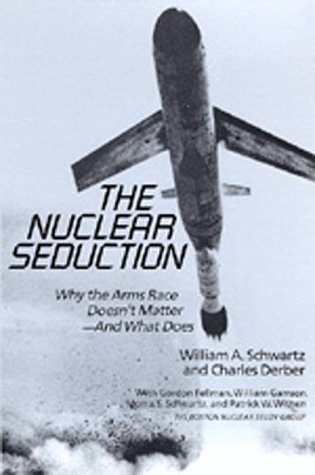 The Nuclear Seduction
by William A. Schwartz, Charles Derber

Description:
This study challenges current assumptions of the post-Cold War period that previous dangers concerning the arms race and nuclear war will fade into obscurity. It contends that today's nuclear problems are based upon interventions by the USA and its allies in such areas as the Lebanon and Angola.

To the Right: The Transformation of American Conservatism
by Jerome L. Himmelstein - University of California Press
In this important book, Jerome Himmelstein offers a new interpretation of the growth of conservatism in American politics. He provides an interpretive map of the political landscape over past decades, showing how conservatives ascended to power.
(8896 views)

Against Empire
by Michael Parenti - City Lights Publishers
Richly informed and written in an engaging style, Against Empire exposes the ruthless agenda and hidden costs of the U.S. empire today. Parenti shows how the conversion to a global economy is a victory of finance capital over democracy.
(6298 views)

A Search for Enemies: America's Alliances After the Cold War
by Ted Galen Carpenter - Cato Institute
The passing of the Cold War is the most important development of the late 20th century, yet the United States clings tenaciously to old policies. Ted Galen Carpenter offers a provocative critique of that status quo strategy ...
(3845 views)

Debating the Divine: Religion in 21st Century American Democracy
by Sally Steenland - Center for American Progress
This book turns down the heat and turns up the light on the question of whether religion should be a force shaping our public policies and our common civic life. We have chosen to examine the many facets of the issue in a thoughtful way.
(12001 views)