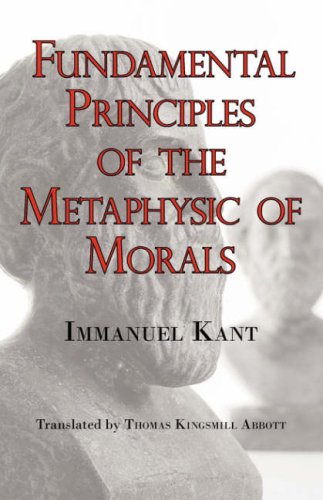 Fundamental Principles of the Metaphysic of Morals
by Immanuel Kant

Description:
How should human beings behave toward one another? How must we behave? One of the most influential thinkers of the Western civilization, a man who profoundly shaped the mind-set of the modern world, Immanuel Kant developed his "Categorical Imperative" as a philosophical proof of the "Golden Rule," and in this 1873 essay, he elaborates upon and defends his understanding of the logical underpinnings of all human morality.

The Metaphysical Elements of Ethics
by Immanuel Kant
If there exists on any subject a philosophy (a system of rational knowledge based on concepts), then there must also be for this philosophy a system of pure rational concepts, independent of any condition of intuition, in other words, a metaphysics.
(7969 views)