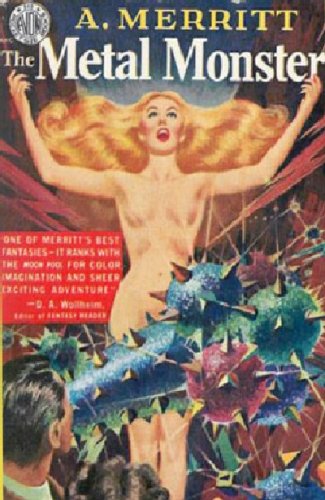 The Metal Monster
by Abraham Merritt

Description:
A classic science fiction novel first published in 1920. In the wilds of the Trans-Himalayan region, a quartet of adventurers — led by Dr. Walter T. Goodwin — stumbles upon a tribe of human primitives, forgotten since the age of Alexander the Great, and an awesome being of living metal commanded by the exiled Norhala.

The Ship of Ishtar
by Abraham Merritt
A universally hailed classic of the fantasy novel by A. Merritt. Merritt was influential upon the science fiction and fantasy world primarily through the imaginative power he displayed in the creation of desirable alternative worlds and realities.
(4090 views)

Burn, Witch, Burn!
by Abraham Merritt - Liveright
A classic with elements of fantasy and mystery. Dr. Lowell is summoned on a strange medical case for the underworld boss Julian Ricori -- one of his men is afflicted with a limp paralysis, along with an inward-directed expression of pure terror.
(4378 views)

The Moon Pool
by Abraham Merritt
Fantasy, romance, adventure; something of mystery, something of the supernatural; ancient legends, older by far than any historical records, with the scientific knowledge of the present day; the power of human love and willing self-sacrifice.
(5248 views)

Dwellers in the Mirage
by Abraham Merritt - Horace Liveright
Two men in one body! That's how Lief Langdon had always felt. One part of him was a modern day adventurer, the other was a strange half-memory of another life where he was a High Priest sacrificing living people to Khalk'ru, a demon god.
(10313 views)