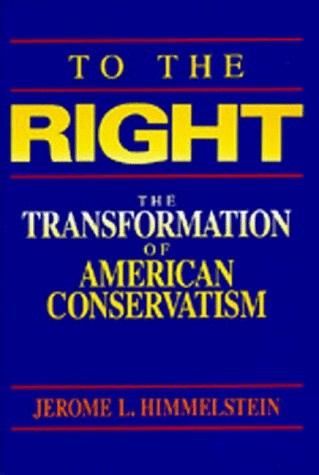 To the Right: The Transformation of American Conservatism
by Jerome L. Himmelstein

Description:
In this important book, Jerome Himmelstein offers a new interpretation of the growth of conservatism in American politics. Tracing the New Right of the 1970s and 1980s back to the Old Right of the 1950s, Himmelstein provides an interpretive map of the political landscape over those decades, showing how conservatives ascended to power by reconstructing their ideology and building an independent movement.

The Betrayal of the American Right
by Murray N. Rothbard - Ludwig von Mises Institute
This book will change the way you look at American politics. It shows that the corruption of American 'conservatism' began long before George W. Bush ballooned the budget and asserted dictatorial rights over the country and the world.
(13670 views)

The Meaning of Mandela
by Xolela Mangcu - Human Sciences Research Council
This lively, engaging and witty collection of lectures brings together the renowned African and African-American scholars - Cornel West, Henry Louis Gates Jr and Wole Soyinka - to reflect on the public meaning of the iconic Nelson Mandela.
(14788 views)

U.S. Immigration Policy
by J. Bush, T. F. McLarty III, E. Alden - Council on Foreign Relations
This report examines immigration into the U.S. in a foreign policy context. It broadens the debate by analyzing issues of economic competitiveness, terrorism and national security, human rights, and public diplomacy in the context of globalization.
(12938 views)

The Perfect Dictator Manual
by Ghetau Gh. Florin
The author strips off myths and legends the personalities of the most sinister dictators: Lenin, Stalin, Mussolini, Hitler, Mao, Pol Pot, or Ceausescu. At the same time, the functioning mechanisms of tyrannical regimes are highlighted.
(8711 views)