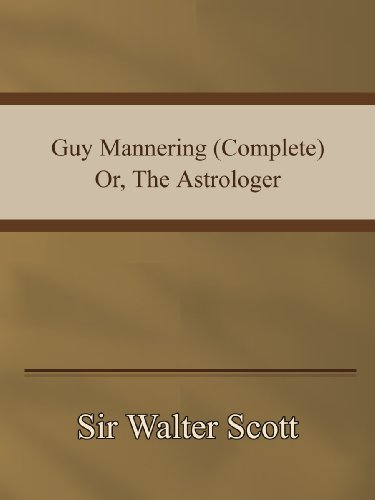 Description:
On the auspicious night that Guy Mannering is shown to the house of the Bertrams of Ellengowan, the Bertrams' heir is born, and Mannering, a skeptical astrologer, predicts the child's future. Five years later the prophecy is fulfilled, and the heir, Harry Bertram, becomes the center of a plot to rob the boy of his inheritance. Harry's subsequent struggles are set against a backdrop of chaos and upheaval in a socially fragmented Scotland where everyone, from landowners to gypsies, is searching for their rightful place.

Peveril of the Peak
by Walter Scott - George Routledge
Ranging from Derbyshire to the Isle of Man and culminating in London, this novel interweaves political intrigue, personal responsibilities and the ways in which the forces of history are played out in the struggles of individual human lives.
(6717 views)

Woodstock
by Walter Scott - Archibald Constable and Co.
Set just after the English Civil War, the story was inspired by the legend of the Good Devil of Woodstock, which in 1649 supposedly tormented parliamentary commissioners who had taken possession of a royal residence at Woodstock, Oxfordshire.
(5055 views)

The Black Dwarf
by Sir Walter Scott - DeWolfe, Fiske
The story is set just after the Union of Scotland and England (1707). The dwarf is Sir Edward Mauley, a hermit regarded by the locals as being in league with the Devil, who becomes embroiled in a complex tale of love, revenge, and betrayal.
(7199 views)