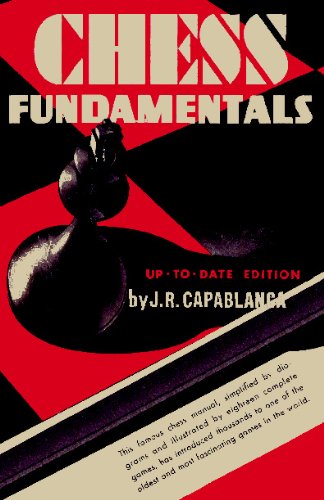 Description:
This is the masterpiece by World Chess Champion Jose Raul Capablanca who is regarded as the strongest chess player who ever lived, prior to the arrival of Bobby Fischer. Chess Fundamentals, though normally for the beginning player, contains valuable insights that will benefit players at all levels of understanding, including masters.

Chess Opening Theory
- Wikibooks
The opening of a game of chess is a battle between two equally matched armies. There is no method that will secure one player a decisive advantage independent from what his opponent does. If there were, no one would play chess.
(5471 views)

Chess and Checkers: The Way to Mastership
by Edward Lasker - ManyBooks
The author gives complete instructions for the beginner and valuable suggestions for the advanced player. Edward Lasker was a leading German-American chess and Go player. He published several books on American checkers, chess, and Go.
(5580 views)

Chess
by Warren Wilkinson, Bill Alexander - Wikibooks
Chess does not involve chance, the outcome completely depends on the players. The book covers the basics of chess, playing and notating the game, tactics, strategy, basic openings, examples of chess games, the endgame, variants and tournaments.
(7185 views)

The Major Tactics of Chess
by Franklin Knowles Young - Little, Brown, and Company
Written in 1898, the stated purpose of this book is to elucidate those processes upon which every ruse, trick, artifice, and strategem known in chessplay, is founded; consequently, this treatise is devoted to teaching the student how to win ...
(6402 views)