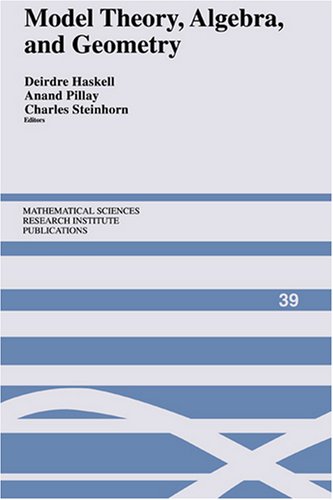 Description:
This book gives the necessary background for understanding both the model theory and the mathematics behind the applications. Aimed at graduate students and researchers, it contains introductory surveys by leading experts covering the whole spectrum of contemporary model theory (stability, simplicity, o-minimality and variations), and introducing and discussing the diverse areas of geometry (algebraic, diophantine, real analytic, p-adic, and rigid) to which the model theory is applied.

Hack, Hack, Who's There? A Gentle Introduction to Model Theory
by David Reid - Smashwords
The skeleton of this book is a science fiction story without the usual mangling of physics. The flesh is composed of non-technical mainstream explanations and examples of the field of mathematics which deals with meaning, called Model Theory.
(3508 views)

Fundamentals of Model Theory
by William Weiss, Cherie D'Mello - University of Toronto
This book provides an introduction to Model Theory which can be used as a text for a reading course or a summer project at the senior undergraduate or graduate level. It is a primer which will give someone a self contained overview of the subject.
(10134 views)

Model Theory
by Stephen G. Simpson - The Pennsylvania State University
An important branch of mathematical logic is model theory, the study of first-order theories and the classes of models defined by such theories. This course will include numerous applications of model theory to algebra, especially ordered fields ...
(2537 views)

Model Theory
by C. Ward Henson - University of South Carolina
The purpose of this text is to give a thorough introduction to the methods of model theory for first order logic. Model theory is the branch of logic that deals with mathematical structures and the formal languages they interpret.
(9014 views)