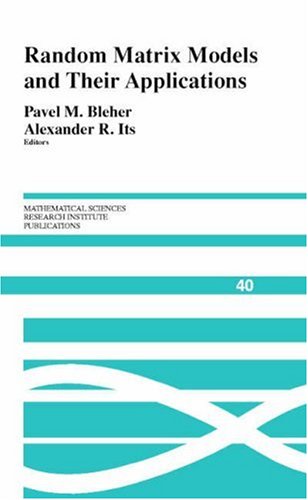 Random Matrix Models and Their Applications
by Pavel Bleher, Alexander Its

Description:
The book covers broad areas such as topologic and combinatorial aspects of random matrix theory; scaling limits, universalities and phase transitions in matrix models; universalities for random polynomials; and applications to integrable systems. Its focus on the interaction between physics and mathematics will make it a welcome addition to the shelves of graduate students and researchers in both fields, as will its expository emphasis.

Markov Chains and Mixing Times
by D. A. Levin, Y. Peres, E. L. Wilmer - American Mathematical Society
An introduction to the modern approach to the theory of Markov chains. The main goal of this approach is to determine the rate of convergence of a Markov chain to the stationary distribution as a function of the size and geometry of the state space.
(12632 views)

Stochastic Integration and Stochastic Differential Equations
by Klaus Bichteler - University of Texas
Written for graduate students of mathematics, physics, electrical engineering, and finance. The students are expected to know the basics of point set topology up to Tychonoff's theorem, general integration theory, and some functional analysis.
(12797 views)

Convergence of Stochastic Processes
by D. Pollard - Springer
Selected parts of empirical process theory, with applications to mathematical statistics. The book describes the combinatorial ideas needed to prove maximal inequalities for empirical processes indexed by classes of sets or classes of functions.
(13983 views)

Probability and Statistics Cookbook
by Matthias Vallentin
The cookbook contains a succinct representation of various topics in probability theory and statistics. It provides a comprehensive reference reduced to the mathematical essence, rather than aiming for elaborate explanations.
(17752 views)