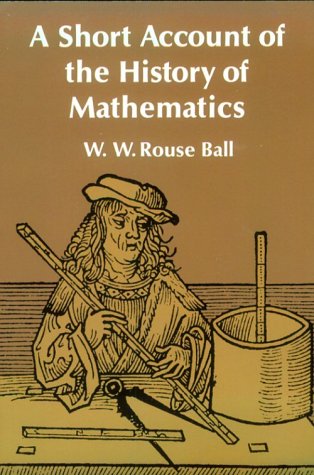 A Short Account of the History of Mathematics
by W. W. Rouse Ball

Description:
This is the classic resource on the history of mathematics providing a deeper understanding of the subject and how it has impacted our culture, all in one essential volume. From the early Greek influences to the middle ages and the renaissance to the end of the 19th-century, trace the fascinating foundation of mathematics as it developed through the ages.

A History of Mathematics
by Florian Cajori - The MacMillan Company
The history of mathematics is important as a valuable contribution to the history of civilization. Human progress is closely identified with scientific thought. Mathematical and physical researches are a reliable record of intellectual progress.
(19473 views)

A Century of Mathematics in America
by Peter Duren, Richard A. Askey - American Mathematical Society
In 100 years the American mathematical community has grown to an influential group that sets the standard for the rest of the world. This book in three volumes depicts the political and mathematical forces that have shaped the AMS in the past century.
(15643 views)

Archimedes
by Thomas Little Heath
History and tradition know Archimedes almost exclusively as the inventor of a number of ingenious mechanical appliances. Few have any acquaintance with the details of the original discoveries in mathematics of the greatest mathematician of antiquity.
(6315 views)