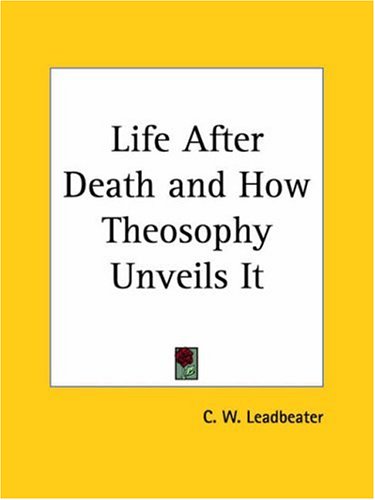 The Life After Death
by C. W. Leadbeater

Description:
Subject of life after death is one of the great interest to all of us, not only because we ourselves must certainly one day die, but far more because there can scarcely be any one among us, except perhaps the very young, who has not lost by death some one or more of those who are near and dear to us. This is an exemplary study of the afterlife as taught by mystics from time immemorial to present day.

Abuses
by Alphonso Lingis - University of California Press
Philosophical work and a travel documentary from Third World countries. It explores the fundamental principles of Continental philosophy, describing the cultures he visits, and the horrific conditions that people in these cultures must endure.
(13363 views)

Knowledge, Perception, and Memory
by Carl Ginet - D. Reidel Publishing Co.
This book attempts a general definition of what it is to know that a thing is so. It gives accounts of the knowledge based on perception and that based on memory. Regarding the justification of claims to know, it takes a fundamentalist approach.
(9094 views)

What is Philosophy?: Embodiment, Signification, Ideality
by Jere Surber - re.press
The enterprise of philosophy has been under sustained attack throughout the 20th century. This work attempts to diagnose the roots of these assaults and responds to them by developing a new constructive and systematic 'image of philosophy.'
(5273 views)

Natural Philosophy
by Wilhelm Ostwald - Henry Holt and Co.
This book is meant to serve as the first aid and guide in the acquisition of comprehensive notions of the external world and the inner life. It is meant to uphold the scientific method, which takes its problems from experience and for experience.
(6625 views)