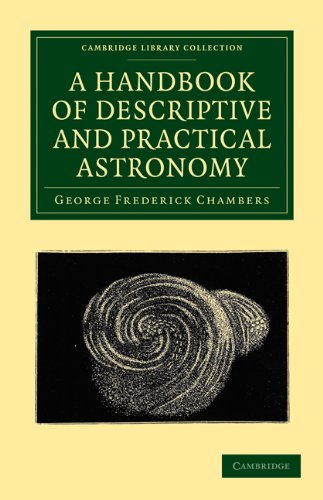 A Handbook of Descriptive and Practical Astronomy
by George F. Chambers

Description:
The work is divided into ten parts covering the following topics: the planets of our solar system; eclipses; gravity and tides; phenomena including aberration and refraction; comets; chronological astronomy; stars; astronomical instruments; the history of astronomy; and meteoric astronomy. It is richly illustrated with photographs and woodcuts depicting a wide variety of astronomical phenomena.

Astronomy of To-day
by Cecil Goodrich Julius Dolmage - Seeley and co.
The book gives an account of the science of Astronomy, as it was known in 1910, in a manner acceptable to the general reader. The author takes the theories of Astronomy out of those mathematical forms, and presents them in the ordinary language.
(11295 views)

A Text-book of Astronomy
by George C. Comstock - D. Appleton and company
The author concentrates attention upon those parts of the subject that possess special educational value. Matter which permits of experimental treatment with simple apparatus is of peculiar value and is given a prominence in the text.
(9890 views)

General Astronomy
by Harold Spencer Jones - Edward Arnold and Company
The book will serve to give the reader a sufficiently complete view of the present state of Astronomy. Mathematics has been almost entirely excluded in order that the volume may appeal to the amateur, no less than the student.
(9469 views)

Hubble Space Telescope: Discoveries
- NASA
The book takes the reader on a tour of Hubble's most significant science successes, combined with some of the telescope's technology and history. The book details Hubble's work in cosmology, planetary science and galactic science.
(7483 views)