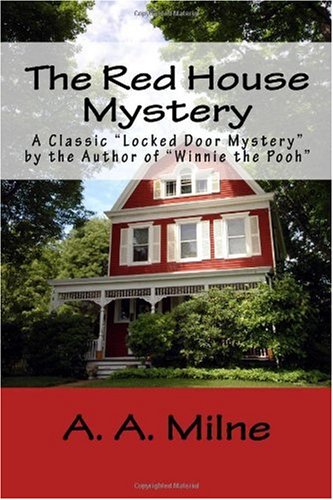 The Red House Mystery
by A. A. Milne

Description:
Set in a country home known as the "Red House," the novel opens on a party weekend, with most of the houseguests away from the house playing golf or tennis. A typical "locked room mystery," the novel features characters who may not be all they seem to be, acting for mysterious motives ranging from love to revenge.

The Stillwater Tragedy
by Thomas Bailey Aldrich - Project Gutenberg
This novel is believed to be the first in which a detective appears in English literature. The story is about a murder accusation. Aldrich writes in a straightforward, realistic style with stunningly majestic language. Full of suspense and thrill.
(7565 views)

The Winning Clue
by James Hay - Grosset & Dunlap
When a woman's voice, pitched to the high note of utter terror, rang out on the late morning quiet of Manniston Road, Lawrence Bristow looked up from his newspaper vaguely, as if he doubted his own ears. He was reading an account of a murder...
(7538 views)

A Dream of Death
by Harrison Drake - Smashwords
As a serial killer terrorizes the area surrounding London, Canada, Detective Lincoln Munroe finds himself at a standstill waiting for the perfect killer to make his first mistake. Lincoln is haunted by dreams of discovering skeletal remains ...
(7754 views)

Crying Bullets
by Conrad Johnson - Smashwords
Arnie Penxa, ex war veteran and retired Detroit policeman, now working for a private school security firm, sniffs out a conspiracy for a multiple school shooting. The problem is that nobody wants to believe him except for a few close friends ...
(6847 views)