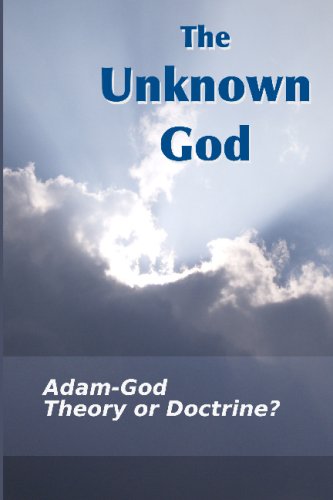 Description:
An LDS Bishop's Counsel to a member of his ward on the Adam-God 'theory'. Did Brigham Young teach the doctrine that God became Adam? What about Joseph Smith? What do the scriptures have to say on this subject? Includes the book "The Forgotten God" and a series of study guides on this subject.

The Pilgrim's Progress
by John Bunyan - H. Holt and company
This book is a powerful drama of Christian faith, the captivating allegory of a journey in search of salvation. It follows a pilgrim as he travels to the Celestial City. An influential classic, known for its simplicity and beauty of language.
(14909 views)

Talmud of Jmmanuel
by John Grau
Jmmanuel, later called Jesus survived the crucifiction and later moved to Kashmir with his mother Mary, married and had children and teached others till he was 115 years old. His spirit was later reincarnated as Mohammed.
(12803 views)

The Biography of the Bible
by Ernest Sutherland Bates - Evinity Publishing Inc
This is an narrative of the development of the Bible, from the earliest manuscripts to the 20th century. It includes the story of the translation of the Bible into English, and presents the Bible in historical and social context.
(10496 views)

So You Don't Want to Go to Church Anymore
by Jake Colsen - Windblown Media
Jake Colsen is an overworked and disillusioned pastor. Facing his own disappointment with Christianity, Jake must forsake the habits that have made his faith rote and rediscover the love that captured his heart when he first believed...
(8023 views)