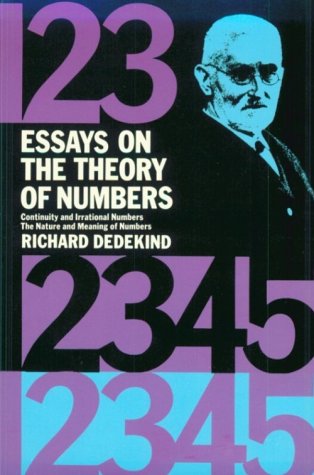 Essays on the Theory of Numbers
by Richard Dedekind

Description:
This is a book combining two essays by Dedekind: "Continuity and irrational numbers" - Dedekind's way of defining the real numbers from rational numbers; and "The nature and meaning of numbers" where Dedekind offers a precise explication of the natural numbers (using what are now called the Peano axioms, since Peano made so much of them after reading Dedekind).

Lectures On Irregularities Of Distribution
by Wolfgang M. Schmidt - Tata Institute of Fundamental Research
The theory of Irregularities of Distribution began as a branch of Uniform Distributions, but is of independent interest. In these lectures the author restricted himself to distribution problems with a geometric interpretation.
(7581 views)

Comments and topics on Smarandache notions and problems
by Kenichiro Kashihara - Erhus University Press
An examination of some of the problems posed by Florentin Smarandache. The problems are from different areas, such as sequences, primes and other aspects of number theory. The problems are solved in the book, or the author raises new questions.
(11239 views)

Notes on Fermionic Fock Space for Number Theorists
by Greg W. Anderson - The University of Arizona
This is a compilation of exercises, worked examples and key references that the author compiled in order to help readers learn their way around fermionic Fock space. The text is suitable for use by graduate students with an interest in number theory.
(10234 views)

Harmonic Analysis, the Trace Formula, and Shimura Varieties
by J. Arthur, D. Ellwood, R. Kottwitz - American Mathematical Society
The goal of this volume is to provide an entry point into the challenging field of the modern theory of automorphic forms. It is directed on the one hand at graduate students and professional mathematicians who would like to work in the area.
(10526 views)