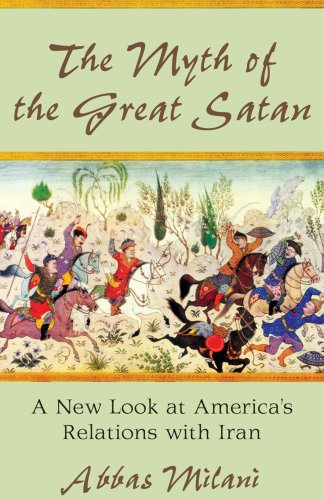 The Myth of the Great Satan: A New Look at America's Relations with Iran
by Abbas Milani

Description:
This book contains a critical review of the history of America's relations with Iran debunks the myth of the United States as the "Great Satan" as a necessary first step in establishing a new relationship between the two nations.

America Entangled: The Persian Gulf Crisis and Its Consequences
by Ted Galen Carpenter (ed.) - Cato Institute
Despite the US' quick military victory, many disturbing questions remain about our involvement in the Persian Gulf region. The contributors to this book believe there must be a full national debate on the rationale for America's new world order.
(2200 views)

Occupying Iraq: A History of the Coalition Provisional Authority
by James Dobbin - RAND Corporation
The American engagement in Iraq has been looked at from many perspectives: the flawed intelligence that provided the war's rationale, the failed effort to secure an international mandate, the rapid success of the invasion, etc.
(10618 views)

The Tragedy of the Middle East
by Barry Rubin - Smashwords
The title was chosen in great sincerity because the theme here is to explain how the region's modern history really is a tragedy. Terrible mistakes were made; the wrong roads were chosen. Bloodthirsty ideology took hold ...
(4120 views)

In Their Own Words: Voices of Jihad
by David Aaron - RAND Corporation
The book presents actual statements and writings of jihadis expressing their views on virtually every subject relevant to their cause, with introductory and contextual material that provides the background and origins of what they are saying.
(6387 views)