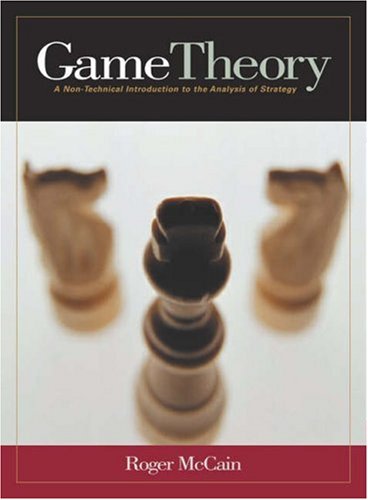 Game Theory: A Nontechnical Introduction to the Analysis of Strategy
by Roger McCain

Description:
Striking an appropriate balance of mathematical and analytical rigor, Strategy and Conflict: A Non-Technical Introduction to Game Theory teaches by example. While Game Theoretic principles are the same across the board, learners typically relate better to examples from their own fields, and McCain provides illustrations everyone can relate to.

The Compleat Strategyst: Being a Primer on the Theory of Games of Strategy
by John D. Williams - RAND Corporation
When this book was originally published in 1954, game theory was an esoteric and mysterious subject. Its popularity today can be traced at least in part to this book, which popularized the subject for amateurs and professionals throughout the world.
(14127 views)

Strategic Foundations of General Equilibrium
by Douglas Gale - Cambridge University Press
This is a book on strategic foundations of the theory of competition. Using insights from game theory, the author develops a model to explain what actually goes on in markets and how a competitive general equilibrium is achieved.
(10055 views)

Introduction to Game Theory
by Christian Julmi - BookBoon
This textbook provides an overview of the field of game theory which analyses decision situations that have the character of games. The book is suitable as an introductory reading and is meant to sharpen the reader's strategic thinking abilities.
(10195 views)