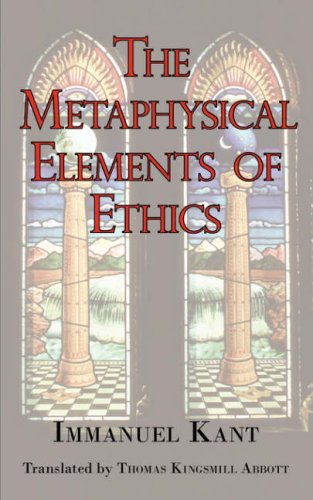 The Metaphysical Elements of Ethics
by Immanuel Kant

Description:
If there exists on any subject a philosophy (that is, a system of rational knowledge based on concepts), then there must also be for this philosophy a system of pure rational concepts, independent of any condition of intuition, in other words, a metaphysics.

Nicomachean Ethics
by Aristotle - George Routledge
Nicomachean Ethics is the name given to the well-known work by Aristotle on virtue and moral character. It plays a prominent role in defining Aristotelian ethics. It consists of ten books based on notes said to be from his lectures at the Lyceum.
(9761 views)

Ethics for A-Level
by Mark Dimmock, Andrew Fisher - Open Book Publishers
Key ideas in the fields of normative ethics, metaethics and applied ethics are explained rigorously and systematically. Individual theories are discussed in detail, before these positions are applied to a wide range of contemporary situations.
(5573 views)