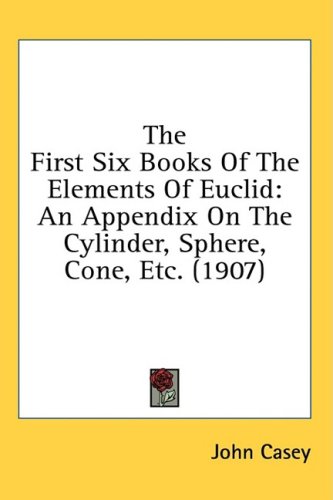 The First Six Books of the Elements of Euclid
by John Casey, Euclid

Description:
This edition of the Elements of Euclid, undertaken at the request of the principals of some of the leading Colleges and Schools of Ireland, is intended to supply a want much felt by teachers at the present day -- the production of a work which, while giving the unrivaled original in all its integrity, would also contain the modern conceptions and developments of the portion of Geometry over which the Elements extend.

First Principles of Symmetrical Beauty
by David Ramsay Hay - W. Blackwood and sons
From the table of contents: Nature of the science of aesthetics explained; Plane figures the bases of all forms; The isosceles triangle; Universal application of the composite ellipse in the arts of ornamental design; and more.
(12630 views)

The Pythagorean Theorem: Crown Jewel of Mathematics
by John C. Sparks - AuthorHouse
The book chronologically traces the Pythagorean theorem from the beginning, through 4000 years of Pythagorean proofs. The text presents some classic puzzles, amusements, and applications. An epilogue summarizes the importance of the theorem.
(16245 views)

An Elementary Treatise on Conic Sections
by Charles Smith - The Macmillan Company
In the following work I have investigated the more elementary properties of the Ellipse, Parabola, and Hyperbola, defined with reference to a focus and directrix, before considering the General Equation of the Second Degree...
(8168 views)

Coordinate Geometry
by Henry B. Fine, Henry D. Thompson - The MacMillan Company
Contents: Coordinates; The Straight Line; The Circle; The Parabola; The Ellipse; The Hyperbola; Transformation Of Coordinates; The General Equation Of The Second Degree; Sections Of A Cone; Systems Of Conics; Tangents And Polars Of The Conic; etc.
(17361 views)