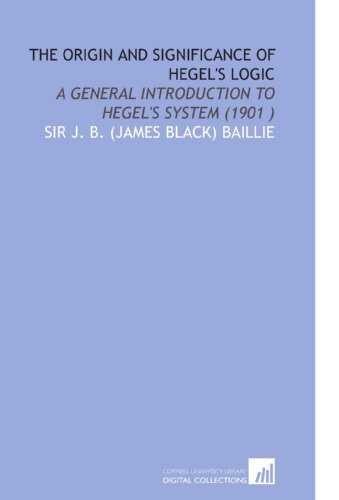 The Origin and Significance of Hegel's Logic
by J. B. Baillie

Description:
The student of Hegel usually finds the Logic the most forbidding and impossible part of the System. It is the aim of the present work to attempt to remove these initial difficulties more particularly in the way of understanding the Logic, but also regarding the point of view of the Hegel's System generally.

Introduction to Logic and Critical Thinking
by Matthew Van Cleave - Lansing Community College
This is an introductory textbook in logic and critical thinking. The goal is to provide the reader with skills that will enable them to identify and evaluate arguments. It is intended for an introductory course that covers formal and informal logic.
(7506 views)

Proof Theory and Philosophy
by Greg Restall - consequently.org
A textbook in philosophical logic, accessible to someone who's done only an intro course in logic, covering some model theory and proof theory of propositional logic, and predicate logic. User-friendly and philosophically motivated presentation.
(11340 views)