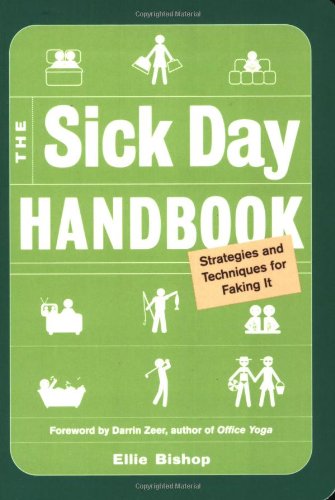 The Sick Day Handbook: Strategies and Techniques for Faking It
by Ellie Bishop

Description:
A hilarious guide to the art of taking sick leave when you really need it. Filled with symptoms and prescriptions for common illnesses and proper stage-setting techniques to pull off the previously unthinkable Tuesday-after-a-long-weekend call-in (your pregnant friend had the baby!), you'll have a pool of credible excuses just waiting to be used (scripts included).

The Foolish Dictionary
by Gideon Wurdz - ManyBooks
An exhausting work of reference to un-certain English words, their origin, meaning, legitimate and illegitimate use, confused by a few pictures. This is a great sarcastic, witty, and sometimes a bit corny attempt at writing a dictionary.
(8406 views)

The Brass Bottle
by F. Anstey - ManyBooks
A djinn, sealed in a jar for three thousand years, has been found by Horace Ventimore, a young and not very flourishing architect. Upon his release the djinn expresses his gratitude by seeking to grant his benefactor's every wish ...
(7933 views)

My Man Jeeves
by P. G. Wodehouse
A collection of short stories by P. G. Wodehouse, first published in 1919. Of the eight stories in the collection, half feature the popular characters Jeeves and Bertie Wooster, while the others concern Reggie Pepper, an early prototype for Wooster.
(12056 views)

The Devil's Dictionary
by Ambrose Bierce - World Pub. Co
Satiric lexicon by Ambrose Bierce, first compiled as The Cynic's Word Book in 1906. The barbed definitions that Bierce began publishing in a weekly journal he edited in San Francisco, brought this 19th-century stock form to a new level of artistry.
(15166 views)