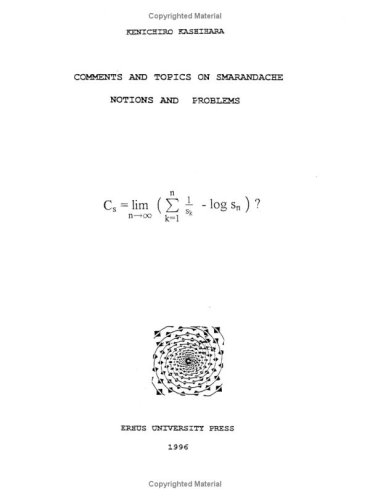 Comments and topics on Smarandache notions and problems
by Kenichiro Kashihara

Description:
This book starts with an examination of some of the problems posed by Florentin Smarandache, one of the foremost mathematicians in the world today. The problems are from many different areas, such as sequences, primes and other aspects of number theory. Some of the problems are solved in the book, although in many cases the author raises additional questions. The second part of the book deals with a function created by the author and given the name the Pseudo Smarandache function.

Predicative Arithmetic
by Edward Nelson - Princeton Univ Pr
The book based on lecture notes of a course given at Princeton University in 1980. From the contents: the impredicativity of induction, the axioms of arithmetic, order, induction by relativization, the bounded least number principle, and more.
(14462 views)

Lectures on Shimura Varieties
by A. Genestier, B.C. Ngo
The goal of these lectures is to explain the representability of moduli space abelian varieties with polarization, endomorphism and level structure, due to Mumford and the description of the set of its points over a finite field, due to Kottwitz.
(6766 views)

Introduction to Shimura Varieties
by J.S. Milne
This is an introduction to the theory of Shimura varieties, or, in other words, to the arithmetic theory of automorphic functions and holomorphic automorphic forms. Because of their brevity, many proofs have been omitted or only sketched.
(6422 views)