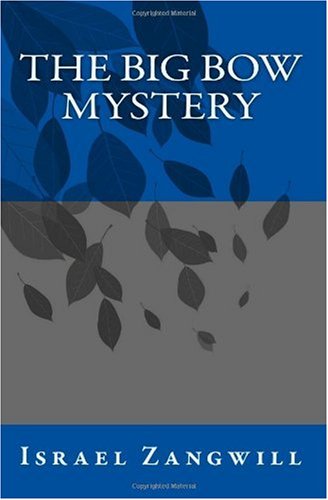 Description:
A classic for all mystery lovers. The Big Bow Mystery by Israel Zangwill was the first locked room murder novel. It has been almost continuously in print since 1891 and has been used as the basis for three commercial films.

The Winning Clue
by James Hay - Grosset & Dunlap
When a woman's voice, pitched to the high note of utter terror, rang out on the late morning quiet of Manniston Road, Lawrence Bristow looked up from his newspaper vaguely, as if he doubted his own ears. He was reading an account of a murder...
(7423 views)

Merrie Axemas: A Killer Holiday Tale
by M. R. Sellars - Smashwords
Merrie Callahan is all grown up now. She doesn't believe in Santa anymore. But she still has an axe to grind with the man in the red suit. The book brings you to the edge, taunts you with unanswered questions, and hangs you with an alternate ending.
(6897 views)

And Then There Were None
by Agatha Christie
First there were ten -- a curious assortment of guests on a private island off the coast of Devon. Their host is nowhere to be found. For each has been marked for murder. One by one they fall prey. And only the dead are above suspicion ...
(5326 views)

An Exhibit of Madness
by Kerry J Charles - Smashwords
As chief curator of the Maine Museum of Art, Dulcie has just opened a new exhibit of Winslow Homer watercolors. It will be complete when the final work is bought. But when Dulcie discovers a body rather than the painting, she's a prime suspect ...
(4011 views)