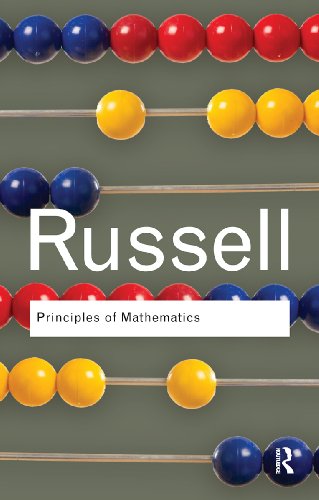 The Principles Of Mathematics
by Bertrand Russell

Description:
Russell's classic 'The Principles of Mathematics' sets forth his landmark thesis that mathematics and logic are identical -- that what is commonly called mathematics is simply later deductions from logical premises. His ideas have had a profound influence on twentieth-century work on logic and the foundations of mathematics.

The Algebra of Logic
by Louis Couturat - Project Gutenberg
Mathematical Logic is a necessary preliminary to logical Mathematics. The present work is concerned with the 'calculus ratiocinator' aspect, and shows, in an admirably succinct form, the beauty of the calculus of logic regarded as an algebra.
(11580 views)

Logics of Time and Computation
by Robert Goldblatt - Center for the Study of Language
Sets out the basic theory of normal modal and temporal propositional logics, applies this theory to logics of discrete, dense, and continuous time, to the temporal logic of henceforth, next, and until, and to the dynamic logic of regular programs.
(9986 views)

Lectures on Linear Logic
by A. S. Troelstra - CSLI
This text deals with logical formalism, cut-elimination, the embedding of intuitionistic logic in classical linear logic, proofnets for the multiplicative fragment and the algorithmic interpretation of cut-elimination in proofnets.
(11584 views)

The Haskell Road to Logic, Maths and Programming
by Kees Doets, Jan van Eijck - College Publications
The purpose of this book is to teach logic and mathematical reasoning in practice, and to connect logical reasoning with computer programming. The programming language that will be our tool for this is Haskell, a member of the Lisp family.
(18538 views)