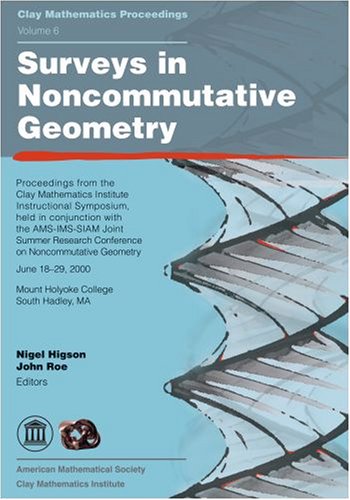 An Introduction to Noncommutative Spaces and their Geometry
by Giovanni Landi - arXiv
These lectures notes are an introduction for physicists to several ideas and applications of noncommutative geometry. The necessary mathematical tools are presented in a way which we feel should be accessible to physicists.
(9818 views)

Noncommutative Geometry
by Alain Connes - Academic Press
The definitive treatment of the revolutionary approach to measure theory, geometry, and mathematical physics. Ideal for anyone who wants to know what noncommutative geometry is, what it can do, or how it can be used in various areas of mathematics.
(10460 views)

Homological Methods in Noncommutative Geometry
by D. Kaledin
The first seven lectures deal with the homological part of the story (cyclic homology, its various definitions, various additional structures it possesses). Then there are four lectures centered around Hochschild cohomology and the formality theorem.
(6620 views)

Deformations of Algebras in Noncommutative Geometry
by Travis Schedler - arXiv
In these notes, we give an example-motivated review of the deformation theory of associative algebras in terms of the Hochschild cochain complex as well as quantization of Poisson structures, and Kontsevich's formality theorem in the smooth setting.
(3885 views)