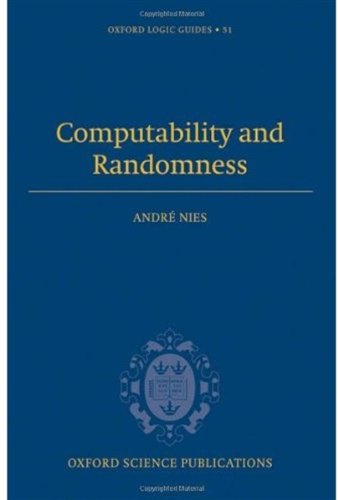 Computability and Randomness
by Andre Nies

Description:
Covering the basics as well as recent research results, this book provides a very readable introduction to the exciting interface of computability and randomness for graduates and researchers in computability theory, theoretical computer science, and measure theory.

Computability and Complexity
- Wikibooks
This book is intended as an introductory textbook in Computability Theory and Complexity Theory, with an emphasis on Formal Languages. Its target audience is CS and Math students with some background in programming and data structures.
(6045 views)

Computability, Unsolvability, Randomness
by Stephen G. Simpson - The Pennsylvania State University
I exposit Turing's theory of computability and unsolvability, as subsequently developed by Kleene and Post. Second, I provide an introductory account of a research area which is currently very active: algorithmic randomness and Kolmogorov complexity.
(1833 views)

Prolog Experiments in Discrete Mathematics, Logic, and Computability
by James Hein - Portland State University
Programming experiments designed to help learning of discrete mathematics, logic, and computability. Most of the experiments are short and to the point, just like traditional homework problems, so that they reflect the daily classroom work.
(16824 views)