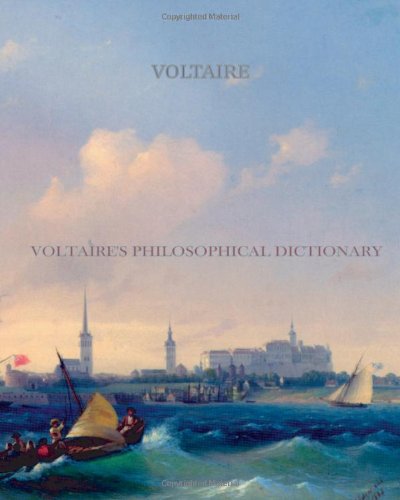 A Philosophical Dictionary
by Voltaire

Description:
Voltaire's Philosophical Dictionary, first published in 1764, is a series of short, radical essays - alphabetically arranged - that form a brilliant and bitter analysis of the social and religious conventions that then dominated eighteenth-century French thought. One of the masterpieces of the Enlightenment, enormously influential work of sardonic wit.

Philosophy and Living
by Olaf Stapledon - eBooks@Adelaide
What am I? Am I free or a machine? Is there a God? What is good, anyhow? What ought we to do with our lives? What is life all about? A man's first approach to philosophy is often due to the hope of finding clear answers to such questions.
(9165 views)

The New Organon
by Francis Bacon - eBooks@Adelaide
This work was revolutionary in its attempt to give formal philosophical shape to emerging experimental science. It challenged the entire edifice of the philosophy of Bacon's time, and left its mark on all subsequent discussions of scientific method.
(9057 views)

Descartes's Imagination: Proportion, Images, and the Activity of Thinking
by Dennis L. Sepper - University of California Press
In this examination of the role of imagination in Descartes's thought, Dennis Sepper reveals a Descartes quite different from the usual dualistic portrayals and offers a critical reconception of the genesis and nature of the philosopher's thought.
(11072 views)