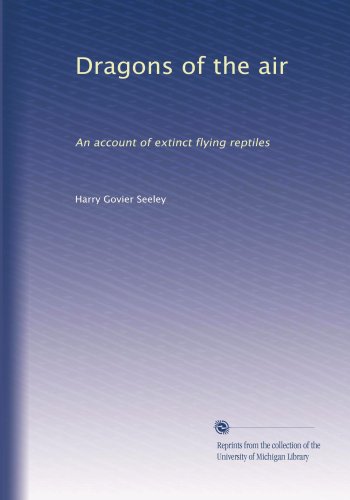 Dragons of the air: An account of extinct flying reptiles
by H. G. Seeley

Description:
The history of life on the earth during the epochs of geological time unfolds no more wonderful discovery among types of animals which have become extinct than the family of fossils known as flying reptiles. Its coming into existence, its structure, and passing away from the living world are among the great mysteries of Nature.

Pioneers of Evolution from Thales to Huxley
by Edward Clodd - D. Appleton & co.
This book tells the story of the origin of the Evolution idea in Ionia, and, after long arrest, of the revival of that idea in modern times, when its profound and permanent influence on thought and on human relations and conduct, is apparent.
(5509 views)

Crossing Over: The Basics of Evolution
by Edith Dempster - Human Sciences Research
This workbook focuses specifically on assisting educators build their own understanding of genes, the mechanisms of inheritance and selection - the basics of evolution. The book uses diagrams, illustrations, text information and activity sheets.
(8062 views)

Evolution and Philosophy: An Introduction
by John S. Wilkins - The TalkOrigins Archive
Critics of evolutionary theory very often misunderstand the issues of the philosophy of science. This essay summarises some of the more important recent developments to show that evolution is no worse off philosophically than any other science.
(5308 views)

Thinking Evolutionarily: Evolution Education Across the Life Sciences
by Jay B. Labov (ed.) - National Academies Press
Evolution is the central unifying theme of biology. Yet today, the topic is often relegated to a few class sessions in introductory biology courses, if covered at all. In recent years, a movement is aimed at radically changing this situation ...
(5237 views)