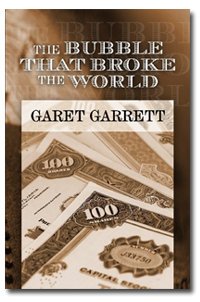 The Bubble That Broke the World
by Garet Garrett

Description:
This book blows away the conventional interpretations of the crash of 1929, not only in its contents but that this book exists at all. It was written in 1931. He ascribes the crash to the pile of up debt, which in turn was made possible by the Fed printing machine. This created distortions in the production structure that cried out for correction.

Privatization of Roads and Highways
by Walter Block - Ludwig von Mises Institute
This treatise on private roads will cause you to rethink the way modern transportation networks operate. It shows how free-market economic theory is the clarifying lens through which to see the alternative that is consistent with human liberty.
(13471 views)

America's Great Depression
by Murray N. Rothbard - Ludwig Von Mises Institute
A staple of modern economic literature, crucial for understanding a pivotal event in American and world history. It is the definitive treatment of the causes of the depression. The book remains canonical today because the debate is still very alive.
(10301 views)

Outline of the U.S. Economy
by Peter Behr - U.S. Department of State
The financial crash of 2008 brought a sudden halt to a quarter-century of U.S.-led global economic growth. The U.S. economy of the 21st century little resembles that of the 18th, but acceptance of change and embrace of competition remain unchanged.
(7859 views)