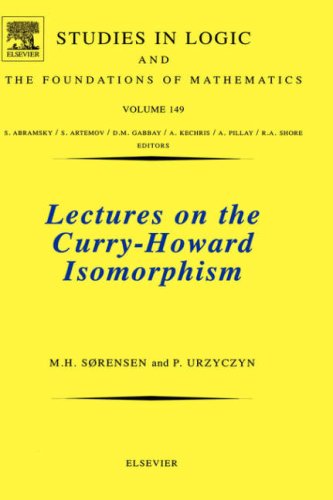 Lectures on the Curry-Howard Isomorphism
by Morten Heine B. Sorensen, Pawel Urzyczyn

Description:
The Curry-Howard isomorphism states an amazing correspondence between systems of formal logic as encountered in proof theory and computational calculi as found in type theory. This book give an introduction to parts of proof theory and related aspects of type theory relevant for the Curry-Howard isomorphism. It can serve as an introduction to any or both of typed lambda-calculus and intuitionistic logic.

Programming Languages: Application and Interpretation
by Shriram Krishnamurthi - Lulu.com
The textbook for a programming languages course, taken primarily by advanced undergraduate and beginning graduate students. This book assumes that students have modest mathematical maturity, and are familiar with the existence of the Halting Problem.
(11557 views)

Programming Languages: Theory and Practice
by Robert Harper - Carnegie Mellon University
What follows is a working draft of a planned book that seeks to strike a careful balance between developing the theoretical foundations of programming languages and explaining the pragmatic issues involved in their design and implementation.
(10174 views)

Semantics: Advances in Theories and Mathematical Models
by Muhammad Tanvir Afzal (ed.) - InTech
The book is a blend of a number of great ideas, theories, mathematical models, and practical systems in the domain of Semantics. Topics include: Background; Queries, Predicates, and Semantic Cache; Algorithms and Logic Programming; etc.
(8298 views)