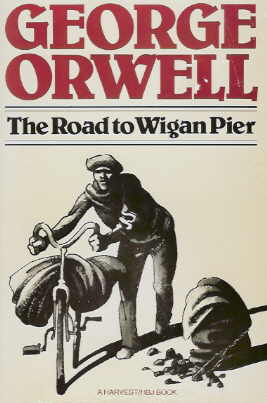 The Road to Wigan Pier
by George Orwell

Description:
The first half of this work documents Orwell's sociological investigations of the bleak living conditions amongst the working class in Lancashire and Yorkshire in the industrial north of England before World War II. The second half is a long essay on his middle-class upbringing, and the development of his political conscience, questioning British attitudes towards socialism.

Coming up for Air
by George Orwell - Victor Gollancz
Insurance salesman George 'Fatty' Bowling lives with his humorless wife and their two irritating children in a dull house in London suburb of West Bletchley. The year is 1938. Doomsayers are declaring that England will be at war again by 1941.
(13771 views)

Keep the Aspidistra Flying
by George Orwell
Gordon Comstock loathes dull, middle-class respectability and worship of money. He gives up a good job to work part-time in a bookshop, giving him more time to write. But he slides into a poverty that destroys his creativity and his spirit.
(11647 views)