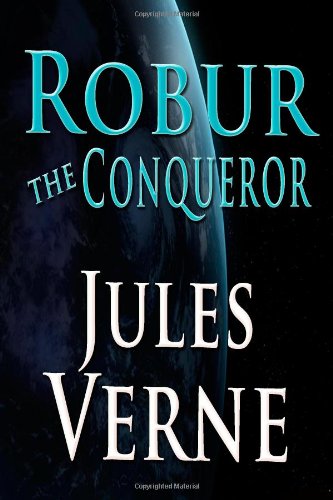 Robur the Conqueror
by Jules Verne

Description:
Robur the Conqueror is a science fiction novel by Jules Verne. The story begins with strange lights and sounds, including blaring trumpet music, reported in the skies all over the world. The events are capped by the mysterious appearance of black flags with gold suns atop tall historic landmarks such as the Statue of Liberty in New York, the Great Pyramid of Giza in Egypt, and the Eiffel Tower in Paris.

Star Maker
by William Olaf Stapledon - Feedbooks
A poetic and deeply philosophical work, the true classics of SF. The book challenges preconceived notions of intelligence and awareness, and ultimately argues for a broadened perspective that would free us from our inevitable anthropomorphism.
(7938 views)

The Underground City
by Jules Verne - Project Gutenberg
Receiving a letter from an old colleague, mining engineer James Starr sets off for the old Aberfoyle mine. From the outset, mysterious happenings start to occur around the main characters, attributed initially to goblins and firemaidens.
(10358 views)

Atlantida
by Pierre Benoit - ManyBooks
This French novel of 'Atlantis in the Sahara' made a huge splash when it was published. The exotic Saharan setting, the stories of desert survival, the overpowering allure of the last Queen of Atlantis, make a memorable, if a bit pulpy, read.
(4255 views)

The Poison Belt
by Arthur Conan Doyle
Professor Challenger, his wife, journalist Malone and adventurer Roxton have gathered with oxygen canisters to watch the final hours of the world. As a poisonous miasma apparently asphyxiates the human race, Malone feverishly writes his copy.
(7881 views)