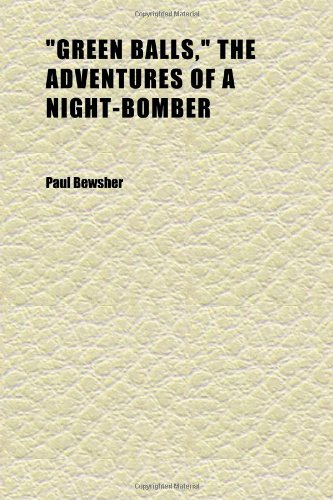 'Green Balls': The Adventures of a Night-Bomber
by Paul Bewsher

Description:
I have tried faithfully to describe the sensations, the strange inexplicable fears, the equally inexplicable fearlessness, of a desk-bound London youth, pitchforked in a moment into the turmoil of war, and into a hitherto unknown, untried occupation -- bombing at night from the air.

The Story of the Champions of the Round Table
by Howard Pyle - ManyBooks
The book details the early adventures of Sir Launcelot, Sir Tristram, and Sir Percival. It is frought with adventure, chivalry, and Pyle's own version of Old English to go with it. Highly recommended for those interested in tales of the Round Table.
(5528 views)

Doppelgaenger
by Henry T. Smith - Henry T Smith Productions
The story of the men of the Reichssicherheitsdienst, the doubles, and the doctor, who moved in the highest government circles as they carried out their duty: preserving Adolf Hitler's life, knowing that the price of failure could be their own death.
(13296 views)

Forward, Children!
by Paul Alexander Bartlett - My Friend Publisher
Forward, Children! is a gripping anti-war novel. It brings vividly back to life the experience of WWII tank warfare as it was fought and endured by soldiers in the tank corps. The novel is also a story of love in French Ermenonville ...
(7590 views)

Against the War
by Roland Menge - againstthewarnovel.com
Against the War is a historical novel examining the response of the Vietnam war generation to the Vietnam war and the effect of the war on American society. The book provides an intellectual and cultural history of the early counterculture...
(5281 views)