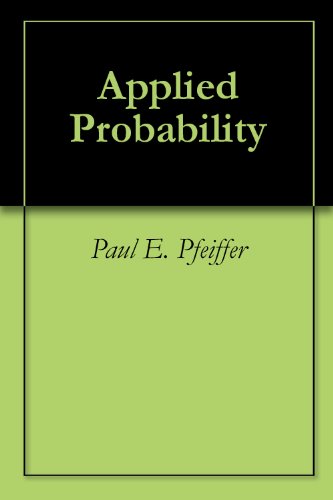 Description:
This textbook covers most aspects of advanced and applied probability. The book utilizes a number of user defined m-programs, in combination with built in MATLAB functions, for solving a variety of probabilistic problems.

Extracting Information from Random Data
by Pawel J. Szablowski - arXiv
We formulate conditions for convergence of Laws of Large Numbers and show its links with of parts mathematical analysis such as summation theory, convergence of orthogonal series. We present also various applications of Law of Large Numbers.
(4233 views)

Radically Elementary Probability Theory
by Edward Nelson - Princeton University Press
In this book Nelson develops a new approach to probability theory that is just as powerful as but much simpler than conventional Kolmogorov-style probability theory used throughout mathematics for most of the 20th century.
(15988 views)

Probability Theory
by S. R. S. Varadhan - New York University
These notes are based on a first year graduate course on Probability and Limit theorems given at Courant Institute of Mathematical Sciences. The text covers discrete time processes. A small amount of measure theory is included.
(17046 views)