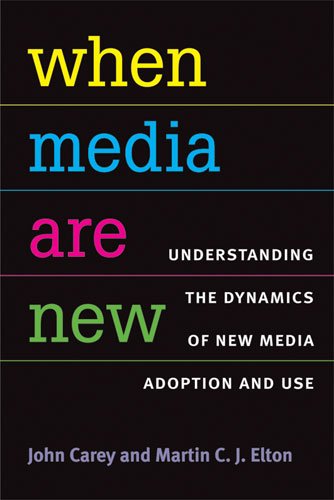 When Media Are New: Understanding the Dynamics of New Media Adoption and Use
by John Carey, Martin C. J. Elton

Description:
The book investigates the human factors involved in technological change and their implications for current and future media. It will find a broad audience ranging from media and communication scholars to historians and organizational theorists to industry professionals.

Designing Media
by Bill Moggridge - The MIT Press
Bill Moggridge examines connections and conflicts between old and new media, describing how the MSM have changed and how new patterns of media consumption are emerging. The book features interviews with 37 significant figures in mass communication.
(1946 views)

Media Piracy in Emerging Economies
by Joe Karaganis - SSRC Books
An independent study of music, film and software piracy in emerging economies, with a focus on Brazil, India, Russia, etc. The report argues that the problem of piracy is better conceived as a failure of affordable access to media in legal markets.
(5661 views)

Media, Technology, and Society: Theories of Media Evolution
by Russell Neuman - University of Michigan Press
The authors explore the issue of media evolution. Focusing on a variety of examples in media history, ranging from the telephone to the television, the radio to the Internet, these essays address questions about the nature of technological change.
(6804 views)