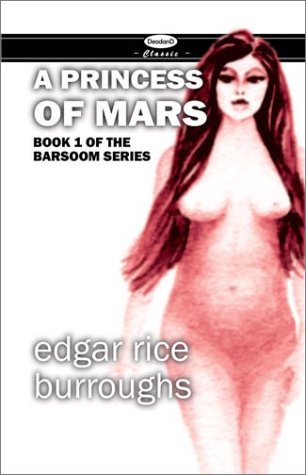 A Princess of Mars
by Edgar Rice Burroughs

Description:
This is a wonderful scientific romance that perhaps can be best described as early science fiction melded with an epic dose of romantic adventure. A Princess of Mars is the first adventure of John Carter, a Civil War veteran who unexpectedly find himself transplanted to the planet Mars. Yet this red planet is far more than a dusty, barren place ...

The Master Of The World
by Jules Verne - Project Gutenberg
A series of unexplained happenings occur across the eastern US, caused by objects moving with such great speed that they are nearly invisible. The first-person narrator John Strock travels to the Blue Ridge Mountains of North Carolina to investigate.
(7830 views)

From the Earth to the Moon
by Jules Verne - eBooks@Adelaide
Written almost a century before the daring flights of the astronauts (first published in 1865), Jules Verne's prophetic novel of man's race to the stars is a classic adventure tale enlivened by broad satire and scientific acumen.
(13207 views)

Atlantida
by Pierre Benoit - ManyBooks
This French novel of 'Atlantis in the Sahara' made a huge splash when it was published. The exotic Saharan setting, the stories of desert survival, the overpowering allure of the last Queen of Atlantis, make a memorable, if a bit pulpy, read.
(4112 views)

The Wondersmith
by Fitz James O'Brien
O'Brien's work is often considered a forerunner of today's science fiction. The Wonder Smith is an early predecessor of robot rebellion, where toys possessed by evil spirits are transformed into living automatons who turns against their creators.
(3839 views)