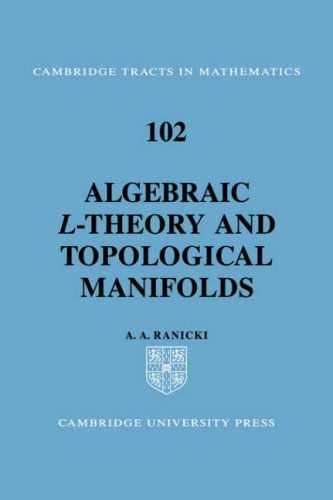 Algebraic L-theory and Topological Manifolds
by A. A. Ranicki

Description:
Assuming no previous acquaintance with surgery theory and justifying all the algebraic concepts used by their relevance to topology, Dr Ranicki explains the applications of quadratic forms to the classification of topological manifolds, in a unified algebraic framework.

An Introduction to Algebraic Surgery
by Andrew Ranicki - arXiv
Browder-Novikov-Sullivan-Wall surgery theory investigates the homotopy types of manifolds, using a combination of algebra and topology. It is the aim of these notes to provide an introduction to the more algebraic aspects of the theory.
(9651 views)

A Primer on Mapping Class Groups
by Benson Farb, Dan Margalit - Princeton University Press
Our goal in this book is to explain as many important theorems, examples, and techniques as possible, as quickly and directly as possible, while at the same time giving (nearly) full details and keeping the text (nearly) selfcontained.
(9896 views)

Algebraic and Geometric Surgery
by Andrew Ranicki - Oxford University Press
Surgery theory is the standard method for the classification of high-dimensional manifolds, where high means 5 or more. This book aims to be an entry point to surgery theory for a reader who already has some background in topology.
(8998 views)