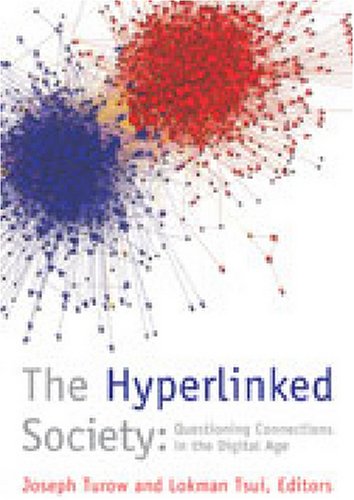 Description:
The Hyperlinked Society addresses a provocative series of questions about the ways in which hyperlinks organize behavior online. This path-breaking collection of essays will be valuable to anyone interested in the now taken-for-granted connections that structure communication, commerce, and civic discourse in the world of digital media.

Media and Cultural Theory
by Stephen Hill, Bevis Fenner - BookBoon
This is an ideal guidebook for undergraduates studying a range of Media and Cultural Studies courses. Alongside more traditional forms like film, television and music, the book also makes reference to Facebook, YouTube and MySpace.
(11480 views)

Media, Technology, and Society: Theories of Media Evolution
by Russell Neuman - University of Michigan Press
The authors explore the issue of media evolution. Focusing on a variety of examples in media history, ranging from the telephone to the television, the radio to the Internet, these essays address questions about the nature of technological change.
(8594 views)

Media and Participation: A site of ideological-democratic struggle
by Nico Carpentier - Intellect Ltd
This book looks at participation as a structurally unstable concept and as the object of a political struggle that makes it oscillate between minimalist and maximalist versions. This struggle is analysed in theoretical reflections in five fields.
(3897 views)

Cross-Media Communications
by Drew Davidson et al. - Carnegie Mellon University
An introduction to the future of mass media and mass communications - cross-media communications. Cross-media is explained through the presentation and analysis of contemporary examples and project-based tutorials in cross-media development.
(8778 views)