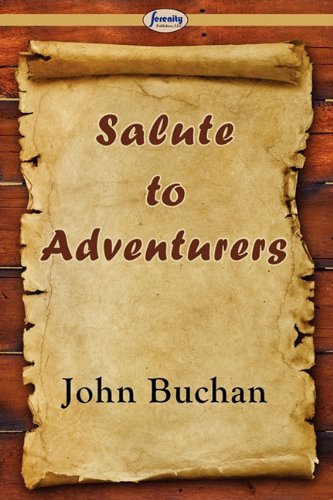 Salute to Adventurers
by John Buchan

Description:
A novel set during the beginning of the Jamestown Colony, Salute To Adventurers is an enthralling saga about one man's struggle to survive and even find love in a land beset by trade controls with England enforced by pirates, religious strife manifested through a fanatic who stirs Indian tribes to attack settlers, harsh environmental conditions, the unending chores of daily life, and much more.

Greenmantle
by John Buchan
This is a classic tale of espionage and adventure. Richard Hannay travels across war-torn Europe on the trail of a German plot and an Islamic Messiah. He moves in disguise through Germany to the Russian border in order to face his enemies.
(10695 views)

Prester John
by John Buchan - Thomas Nelson
Prester John, set more than a century ago in backwater South Africa, is the great grandfather of today's thrillers. A young hero confronts a massive uprising by tribesmen who wish to slaughter all the white settlers for a hundred miles around.
(6042 views)

The Thirty-Nine Steps
by John Buchan - Grosset & Dunlap
Buchan's best-known thriller (made into a movie by Alfred Hitchcock). He introduces here his most popular hero, Richard Hannay, who is an ordinary fellow caught up in the dangerous and dramatic race against a plot to devastate the British war effort.
(12687 views)