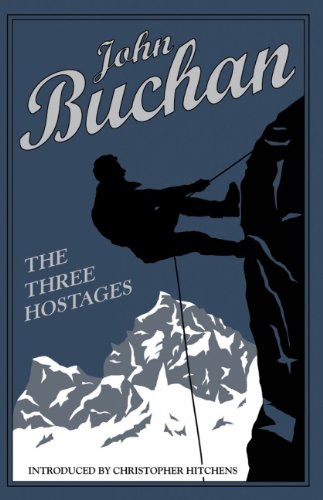 The Three Hostages
by John Buchan

Description:
After the War, Hannay is married to Mary and living peacefully in the Cotswolds, when he receives a request to help solve the mysterious kidnapping of the children of three prominent people. Given nothing to go on but a few mysterious clues, Hannay, assisted by friends like Sandy Arbuthnot, must track down the dastardly villains behind the plot before it's too late.

Huntingtower
by John Buchan - Doran
Dickson McCunn has sold his business and taken early retirement. As soon as he ventures out to explore the world, he is swept out of his bourgeois rut into bizarre and outlandish adventures, and forced to become a reluctant hero ...
(2703 views)

Sick Heart River
by John Buchan - Hodder & Stoughton
Edward Leithen is given a year to live. Fearing he will die unfulfilled, he devotes his last months to seeking out and restoring to health Galliard, a young Canadian banker. Galliard is in remotest Canada searching for the River of the Sick Heart.
(4572 views)

The Thirty-Nine Steps
by John Buchan - Grosset & Dunlap
Buchan's best-known thriller (made into a movie by Alfred Hitchcock). He introduces here his most popular hero, Richard Hannay, who is an ordinary fellow caught up in the dangerous and dramatic race against a plot to devastate the British war effort.
(12687 views)