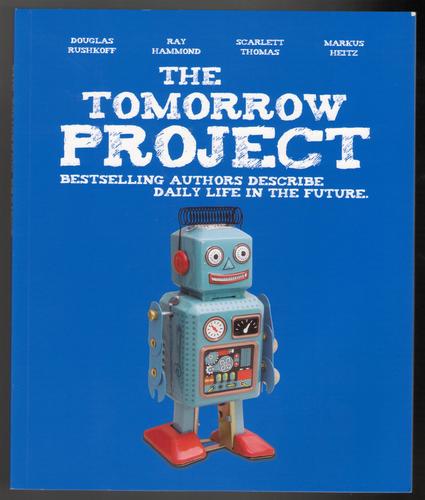 Description:
All four stories in this collection are based on technologies Intel is currently developing in their labs. What is striking about them is that even though they are all science fiction stories they are all first and foremost, stories about people. Each story is unique in its own vision and portrayal of life in the future, but each of them is extraordinarily good at capturing the human drama of the future.

Phantom Duel
by Ford McCormack - Infinity Science Fiction
Faria, as it was called in the Vega system, was about the size of Earth and its atmosphere was tolerable to humans -- there the resemblance all but ended. For its weather was insufferably hot and its topography fantastically tortuous ...
(471 views)

Police Your Planet
by Lester del Rey - Avalon Books
SF novel that would appeal to Mickey Spillane fans, this book features lots of violence, beatings, and blood. But this isn't just a crime novel put into space; this is a hard SF novel, and the terraforming of Mars is central to the story.
(12330 views)

The Stargate Black Hole
by V Bertolaccini - Smashwords
A secret agent probes scientists creating a stargate after time warps and black holes are made in particle accelerators in space, and enters it and hurtles through a gateway, and a starship crew is attacked by a devil-like presence in deep space ...
(5363 views)

When Minds Collide
by Marjorie F. Baldwin - Smashwords
Can two men coexist inside one mind? Andrew Caine and Joshua Scherrer can barely coexist outside, on the same planet. After they're involved in a fatal car accident, the enigmatic native Phoenicians have sent someone to 'help' them blend together.
(5330 views)