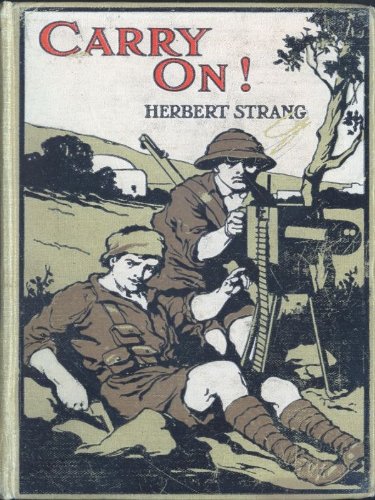 Carry On! A Story Of The Fight For Bagdad
by Herbert Strang

Description:
Mesopotamia, 'the land between the rivers,' has been brought by Time's revolution once more into the foreground of the history of the world. The plains where Abraham, Isaac and Jacob tended their flocks and herds; where the hosts of Sennacherib, Shalmaneser and Alexander contended for 'world-power' in their day; where the Arabs, heirs of ancient civilizations, reared a civilization of their own until it fell under the blight of Turkish dominion: have become once more the battle-ground of opposing armies, the representatives of conflicting spirits and ideals.

The Voodoo Gold Trail
by Walter Walden - Small, Maynard & Company
It was on a tropic sea, and night, that I heard a little scrap of a tale that had in it that which was destined to preserve my life. The waning moon had not yet risen; the stars were all out, the Milky Way more than commonly near.
(7583 views)

Manituana
by Wu Ming - Verso
1775 -- The conflict between the British Empire and the American colonies erupts in all-out war. Rebels and loyalists to the British Crown compete for an alliance with the Six Nations of the Iroquois, the most powerful Indian confederation...
(5353 views)

Shike
by Robert J. Shea
Beautiful young Taniko struggles under oppression as the mistress of the cruel Kublai Khan, and Jebu, a young monk, is transformed into a fierce warrior, in a saga of the ancient Orient during a time of bloodshed and magic.
(7310 views)

For The Term Of His Natural Life
by Marcus Clarke - The Australian Journal
Forced to conceal his identity and forego his inheritance, Rufus Dawes is unjustly implicated in his father’s murder, convicted of theft and sentenced to be transported to Australia, where he encounters the brutality of the penal system.
(8190 views)