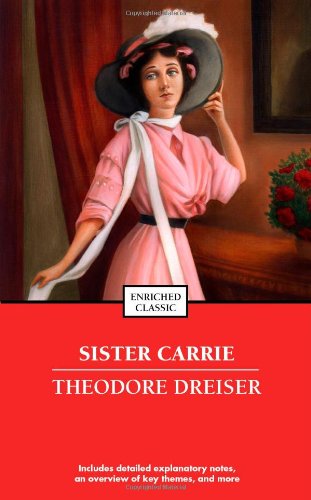 Description:
Sister Carrie (1900) is a novel by Theodore Dreiser about a young country girl who moves to the big city where she starts realizing her own American Dream by first becoming a mistress to men that she perceives as superior and later as a famous actress.

The Titan
by Theodore Dreiser - John Lane Co.
Dreiser presents the story of Frank Cowperwood, a turn of the century financier who desires to use his power and influence to force his will on a city by bribery and coercion. Despite his power and wealth he is unable to love ...
(4722 views)

The Financier
by Theodore Dreiser - Harper
Based on the life of flamboyant financier C.T. Yerkes, Dreiser's portrayal of the unscrupulous magnate Cowperwood embodies the idea that behind every great fortune there is a crime. Dreiser's great intensity gives this portrait a powerful reality.
(9312 views)

Jennie Gerhardt
by Theodore Dreiser - Harper & Brothers
Novel by Theodore Dreiser, it exemplifies the naturalism of which Dreiser was a proponent, telling the unhappy story of a working-class woman who accepts all the adversity life visits on her and becomes the mistress of two wealthy and powerful men.
(10729 views)

The Color of a Great City
by Theodore Dreiser - Boni and Liveright
In stories such as Six O'Clock, The City Awakes and The Waterfront, the author returns the reader to turn-of-the-century New York with his early memories of the city. Also they represent certain phases which now are fast vanishing or are no more.
(2866 views)